translated with help from "Alta Vista"


BIOKART is a program, which makes it for the active nature observer possible to process and meaningfully evaluate its accumulated data! The origins developed at about 1987, when the data abundance of the mapping became gradually indeterminable. Our association has a ATARI ST-1040 and the original mapping program I developed with OMIKRON basic, which proved its efficiency then on the FALCON-030. It was a living program, new ideas was again and again carried out. Particularly other friends want to get this program on a PC to give it a larger number of interest. At the end of 1994 could it be presented for the first time on the PC! The programming language was Quickbasic, version 4.5.

BIOKART solves the great problem of the exact position determination, since the position of the observation with the mouse is clicked directly in in-scanned maps. There the hitting a corner coordinates of each map in Gauss Krueger coordinates (GKK) on the meter to be determined exactly, the conversion is in reverse possible on the pixels of the screen. The exact position in GKK permits then the representation of the observations in other maps with other scales.

Our observers have increased cutouts of measuring table sheets in DIN-A4 format with itself, into which they register the observations. The clerical work facilitates a list of the most frequent birds, each bird has a number, which is registered in the place of the observation into the map. For example the nightingale has the number 53, a circle therefore is called singing, district-indicating, 53-2x means 2 ex., 53-1P (1 pair), 53-1,1+3 (pair with 3 juv.) etc. In this short form all birds of a excursion can be registered into a map and be passed on provided with the date for registering. I prefer another simpler method: on the way I speak the observations with exact position on a dictating machine and register it at home into the maps and afterwards into the computer. Per year we got in the best years (1995-98) 7.000 to 10.000 observations, up to now we registered with BIOKART over 60.000 bird observations.

Only for Frankfurt area we have merged approx 200 maps in BIOKART. The visible field of the entry maps is in the landscape format about 2-3 km width. In a general map one can evaluate the entries in the diagram or text file (by colored points) after year, month, day, status, kind, observer, remarks, area and still more. All GKK of the topography maps (TK) of Hessen (federal state of Germany) are entered into the computer, so that with the position also the TK quarter is stored. After representation with colored points depending upon representation scales a quarter TK grid and afterwards still another 100x100m grid or a 1000x1000m grid depending upon map size over the map put with circle depending upon number. 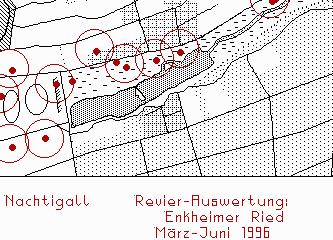 Since some birds in the same area are mapped more frequently, the possibility exists of evaluating to DISTRICTS.
There are several auxiliary files, when entering only the bird number, german and scientific name will come from the program or one writes the beginning of the bird name and gets a list of some birds and selects themselves the correct birdname. Kinds are held in specially files, learning areas and observers, if new are added.

BIOKART is not only for birds suitably, also bats, insects, plants, altogether nearly 20 kind lists in german and scientific names are free of charge. There is an IMPORT, in order to train foreign data in ASCII format into the fields of Biokart, exactly the same as an EXPORT, which permits it to spend only few fields if one did not like to pass on e.g. the exact location of a nest. DBASE data can be imported in BIOKART, an export for other programs, e.g. EXCEL is likewise possible, in order to keep the data compatible to other data collections. There is still many further characteristics present, which cannot be described here all.

Because it is a DOS program and runs under Windows only in a window, it is unfortunately no longer on the current conditions. Perhaps I am added times to update it.

Subsequently some examples, what one can evaluate with BIOKART:
back to german site
To the initial side of my website: www.vogelstimmen wehr.de