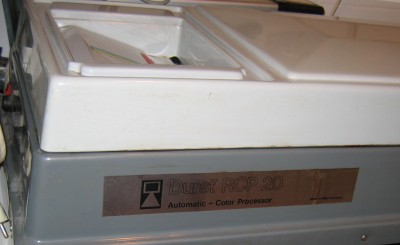 If RA-4 comes RCP20 have to go! One could have this fear at least, after first nothing and then only a halfhearted reequipping supply of DURST came as solution. Now fearing for has an end: In this contribution we tell you, how you can process the RCP20 on a development time of 45 seconds trims and RA-4-Material perfectly.
While laboranten with drum processors can drive almost any process, the owners of (not modular) machines always encounter in the case of a process conversion larger and partly also not problems which can be solved. Because one knows a machine, which is conceived for a certain process, not or not optimally for other processes normally uses - that is evenly the price for the otherwise faster and more comfortable processing.
A special position has here the RCP20 of DURST: It is optimized not on that so far as standard valid EP-2-Prozess, with which the bath times for developers and bleaching fixing bath differ clearly, but operates with same bath times. This circumstance proves with the processing of EP-2 naturally as disadvantage, since one does not come on those shortest possible total turn-around time. Before the background of the world-wide conversion to the RA4-Prozess looks however differently, because with this process developers and bleaching fixing bath have the same bath times.
Quite so, as the thing thereby seems, it is however not rosy: The RCP20 offers same bath times, but these are much to for a long time. One concretely comes on a development and a bleaching fixing time of 140 to 145 seconds, needs becomes however in each case only 45 seconds. Now naturally the thought is situated near to increase easily the drive rate of the machine and to thus shorten the turn-around time. But more with difficulty than one shows oneself first mine could.

In snail speed to high rate
For the modification of the turn-around time one needs to adjust the automatic controller for the drive rate in the simplest case only. Such an automatic controller those does not offer to RCP20 however, so that with this machine, from the manufacturer firmly given turn-around time is only available. In order to change the drive rate, one must intervene thus in the interior life of the machine. In addition, that is more easily said than done, and who threw already once a view in the inside of its RCP20, it knows that one with any simple cheat to nothing align can.
Without something professional is of an acceleration of the RCP20 therefore not to think - and since those came already end of passed yearly effected announcement of DURST even quite, after which it meant that one wants to be able to be broken in for the re-equipment "somewhat". Unfortunately from it however no small bag with gear wheels became and get it for nine and thirty eighty or similarly reequipped, but only one service supply: Who sends its RCP 20 to DURST, it - for approximately 150 DM - gets after two weeks faster and also generally checkt back.
As far as so good, but the dream of the super+short turn-around time lasted not for a long time. Because as one soon determined, leaves themselves developer- and bleaching fixing time of 140 to 145 seconds "for constructional reasons" only to 120 seconds reduce, which more briefly, but than those shortest possible time is still clearly longer. Thus not enough: Pointed to newest information DURST will not receive this service supply upright - "continuous tests to have that such reequipped machines cannot fulfill our high claim of quality", such a speaker of DURST.
Thus we are today again in the same place as scarcely one year ago, when the RA4 came to the hobby laboratory, and owners of RCP20 it asked rightfully whether this confusion was really necessary, whether one cannot count as buyers of a label device of a renowned manufacturer on a better, adequaten service and whether the technical reasons are flanked not also by economic interests - finally also Printo and ACP200 want to be brought still to the man...
However: After long time we can offer here at least all a solution of the problem to those, which have a fate little relating to crafts. Found from Eduard Giessegi, teacher for art education and photography at the High School in Forchheim. "The idea to the change came me in connection with a bargain", says the 42year old paedagogue and completes: "there I still rather black-and-white photograph and also in the school laboratory SW than the higher art publicise, tried I, to accelerate the monotonous and unkreative color processing - only thus succeeds manufacturing in the lessons also color pictures in an acceptable time so that the pupils can worry about the picture design"

Highspeed RCP 20 - with 50 DM participate you
In order to accelerate the RCP20 really reasonably, one have to modify the mechanics radically. This by two new gear wheels become possible and a toothed belt, if the machine is equipped with such not already. All parts one get it for example from Conrad electronics for scarcely 50 DM. It is possible to convert the reduction ratio of the past drive into a speed ratio from 1:3. The machine achieves then a rate, which leads to a development and a bleaching fixing time of approximately 45 seconds.
The thing has a hook however: Depending upon tool kit you must possibly fall back to the assistance of a precision mechanic. Concrete the propelled axle is to be turned off, so that one can install the small gear wheel to drill out and the large gear wheel so that it fits on the propelling axle. Before putting the large gear wheel on the propelling axle one must make then still the directly lying beside exhaust wheel on the engine axle somewhat smaller, so that the two do not come themselves into the traverse. But a side cutter is sufficient, with whom one cut simply the wings of the ventilator. After are concluded this pre-working, one can put and with the clamping screws lock the gear wheels on the axles. In the end the toothed belt is used and strained. The run and the tension of belt are to be adjusted in such a way that the axle does not strike and the machine runs approximately (to stretching the toothed belt one loosens the screws at the disk, on the engine and transmission is installed, shifts her accordingly and tightens the screws again).

The new drive mechanics and the cuted exhaust wheel.


Essential: A velocity test
If one proceeds from the ideal velocity standard RCP20 (140 to 145 seconds of development and bleaching fixing time), there are after the change in the case of use of the gear wheels mentioned purely computationally 46 to 47 seconds of development and bleaching fixing time. This corresponds rather exactly the RA-4 process time (45 seconds per bath), but this value is not always achieved. The cause for deviations is situated in the dispersion with the production series to never exclude completely leaves itself. In the case of the RCP20 converted here a development and a bleaching fixing time of 40 seconds resulted after the change. Such differences are however no problem - one can adjust you by an adjustment of the temperature. With the Diluprint-4 used here for the practice attempts the best results are at a temperature from 25 to 26 degrees.

Note: If you likewise use this processing record, but still over the older Dilublix bleaching fixing bath, must you order it 1+3 instead of 1+4 set. Who converts its RCP20 in the way described before, the real new rate should determine thus in each case and adapt the temperatures.
In order to determine, on which development and bleaching fixing time one comes, one a piece puts photo paper into the current - and with liquid filled! - machine and measures the time of entering the paper by the rollers of the developer rack up to entering the paper by the roll of the rack; for this time the optimal temperature adjustment one infers afterwards from the chemical description of application.

Do it yourself
To the termination you should know still following: In the way described before the converted RCP20 was extensively tested. The test runs extended over a half year, whereby several hundreds paper were processed. All results were perfect and constant; Irregularities did not occur. Nevertheless it must be pointed out that with a change after this guidance no guarantee for a perfect function and error free results can be taken over; beyond that it is to be considered that a possibly still valid manufacturer warranty goes out by this intervention. Particularly importantly these notes appear to us, after DURST does not offer re-equipment on according to short times and this with continuous tests justified, which showed that such reequipped machines do not fulfill the high claim of quality of DURST. We can it this not reconstruct, may in addition, not for all machines ever built exclude.
Data of the RCP20 for RA-4

The (really tested) table codes refer to 2,5 litres of work solution of the Diluprint-4-working bathes on utilization of the chemicals without recovery.

Note: The part numbers and prices apply to the purchase from Conrad Electronic, as one from different possible sources of supply. Status: 2004

Scanned from: Foto Hobby Labor 4/90
Author: Eduard Giessegi/RG Also I successfully converted my RCP20 after this guidance. It pay attention that the gear wheels of the racks before inserting into the filled continuous processor in waterbath are made usual, in order not to load the engine after the new translation by caked-on axles still additionally!
I use the process: Mono PK RA-4 von Tetenal, for 2,5 litres of color developers and 2,5 litres bleaching fixing bath (costs 1999 approx. 48.-DM, Saturn-Hansa Frankfurt/Main). I set and always increase the developer temperature at first to 26 degrees of C by 1 degree after throughout of 10.000 qcm photo paper. Thus:
to 10,000 qcm  26 °C
to 20,000 qcm  27 °C
to 30,000 qcm  28 °C
to 40,000 qcm  29 °C
to 50,000 qcm  30 °C
For the temperature measurement I take a digital thermometer (with cable for outside temperature, to buy in the shops for approx 10 €), since the inserted automatic controller measures too inaccurately. 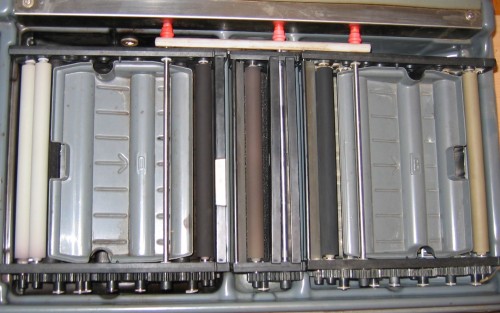